Is anybody else singing to themselves with that blog title? No? Just me? Oh well.

So friends, World Oceans Day has come and gone. I hope you had a great day and proudly wore blue for the occasion! This lobster is doing its part with WOD’s motto, “Wear blue, tell two”: 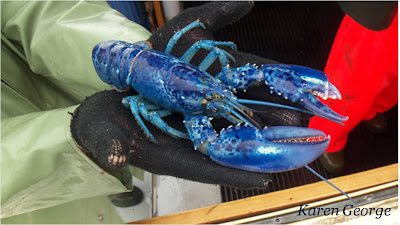 PEI's electric blue lobster
The blue Homarus americanus was caught off of Prince Edward Island (of Green Gables fame) by Blair Doucette. He and his wife are donating "Fluffy" (I couldn't have come up with a better name myself!) to the Rustico Harbour Fishing Museum, so that the lobster can continue spreading the news about World Oceans Day, no doubt.

But how did Fluffy come to be blue? It’s pretty rare (some say 1 in a million, some say 1 in 2 million… who knows? Seriously, do you know? Comment!), but not unheard of. A genetic defect awesome-fect leads to the formation of crustacyanin, the blue carotenoid-protein of the lobster shell, to the max apparently.

Lobsters also come in the multi-colored variety! This asymmetry coincides occasionally with hermaphroditism in lobsters!! Amazing, right? Lobsters can be sexed easily by looking at the first set of pleopods: males have thick, hard appendages (two of ‘em, just like snow crabs!) and females have soft, thin appendages (also 2). In bilateral gynandromorphs, one appendage is thick (male) and the other is thin (female)! 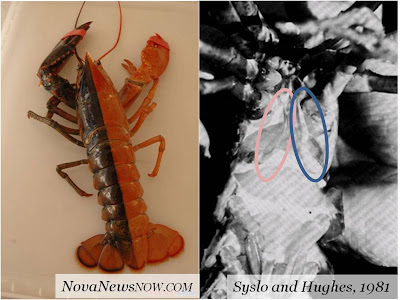 asymmetry in action:
on the left, a lobster giving off the impression of being half-cooked
on the right, the reproductive structures of a female (in pink) and male (in blue)
And guess what: this is also seen in snow crabs!! They end up looking pretty lopsided though, due to their extreme sexual dimorphism of carapace widths: 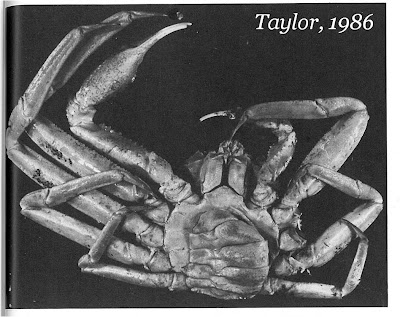 Chionoecetes opilio male (our left, his right) and female (our right, her left)
Who knew crustaceans could be so cool, right?

Well, keep wearing blue and spreading the good news of crabs and lobsters alike. The last blue lobster to grace Prince Edward Island’s shores was Donald, caught in 2009 and housed at a lobster restaurant (although he was never served on the menu!). We’ll see if another one turns up in 2013! 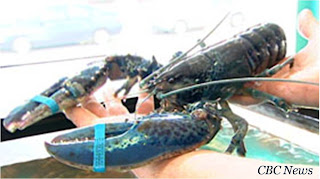 What Was My Master's Project?

Do you love crabs?